The Basics of American Politics Explained

The first is that everything we see is always so biased! No matter who it is they are saying the other side is lying or putting out ‘fake news’, and so unless you already know a lot about the subject (which I normally don’t), it is impossible to work out who is telling the truth. The second problem is that everyone always talks about who is going up against who in the Presidential Debate, or who is going to for which senate seat, but no one actually explains what it all means. What powers does the senate actually have? What does it mean when the President signs an executive order? Unless you are already in the know it is like watching a TV show starting on season 5, all of the pieces are in place, but you have no clue how they got there or what impact it has for us.

That is what we are going to address here. We will explain the basics of American Politics clearly and unbiasedly, and help you avoid these problems in the future.

The ultimate law in the United States, the Constitution, and its 27 Amendments (changes) layout the fundamental rights that every US citizen has and that every subsequent law must abide by. Although it is possible to add more amendments, as shown by the 27 that have happened, in reality, it is extremely difficult with most of these coming in the first few years of our democracy. For one of these to occur, it must be approved by two-thirds of Congress and three-quarters of the states, so in reality, the Constitution as it stands is the framework around which all of our laws are built.

One of the most important things to understand about American Politics, and what makes it so complicated, is that no one person or organization has complete control. Having just fought a long and bloody war against a tyrannical English king, the founding fathers were very keen to make sure no ‘king’ could emerge in the US, and so they created the three branches of government. This separation of powers, inspired by French philosophers, was one of the defining features of the new US democracy and would set the stage for the next 200 years in our country. These three branches are the executive, legislative, and judicial, and we will now take a look at each in turn and how they impact and limit the powers of the other two.

Probably the easiest to understand, the executive branch is essentially the President, the Vice President, and the heads of departments and are in charge of the enforcement and implementation of laws in the United States. 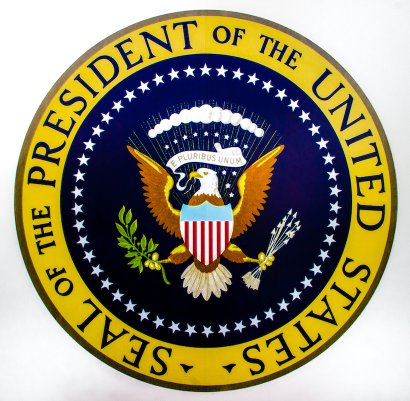 Chief Citizen, Chief Diplomat, Commander in Chief, the titles and roles of The President of the United States are many and it would be impossible to go into detail about every aspect of the job, so we will just talk about the big ones. Elected in Presidential elections every four years and serving a maximum of two terms, the President while they are in office, is arguably the most powerful person on the planet.

The most obvious role of the President is having ultimate control over the armed forces. They can order operations within any of the services anywhere in the world, giving them a huge amount of power and responsibility. Since the War Powers Resolution of 1973, this power has been limited somewhat so that any invasion in a foreign territory over 60 days must be approved by Congress, who also have the ‘power of the purse’ and so must agree if a President wants to increase military spending, but the President still maintains almost total control of our military. The President is also responsible for negotiating and signing treaties with other countries in their role as chief diplomat, making them even more dominant when it comes to foreign affairs.

Closer to home though the President is also responsible for signing any bills passed by congress or vetoing them (refusing to sign them so congress has to go back and change them) if he doesn’t agree. Although technically Congress can override a President with a ‘supermajority’ of with two-thirds of the votes, due to its divided nature, this rarely happens and so the President has a huge influence in the passing of laws. If they do not want to wait for congress which can often take weeks or months, the President is also allowed to pass executive orders, which although cannot raise money or mess with the budget, can have a huge effect on how laws are enforced or departments are run.

The President also has a huge amount of ‘soft-power’, meaning that although they may not have official powers to do something, they are incredibly influential within their party and as leader of the country. This means that often if a President wants to guide their party or a department in a certain direction, they will get their own way even if they have no direct power to do so.

Often described as being a heartbeat away from the presidency, the Vice-President’s most important role is being ready to take over should the President die in office. While they do have some express roles such as voting in a tie in the senate, this is by far their most important job.

Generally, Presidents will select a Vice-President that while not too dissimilar in their views, will serve to appeal to a group of voters that perhaps the President is having difficulty reaching out to, such as a very old President selecting a much younger vice. The two appear on the ticket together in Presidential elections and you vote for both at the same time.

It is impossible to talk about the Presidential elections without talking about the Electoral College. Technically speaking when voting on November 3rd, we won’t actually be voting for the next Presidential ticket, but instead for 538 Electors who will elect the President. If you hear the expression ‘270 to win’, this is where that comes from and is the minimum amount of Electoral College votes needed to become President. 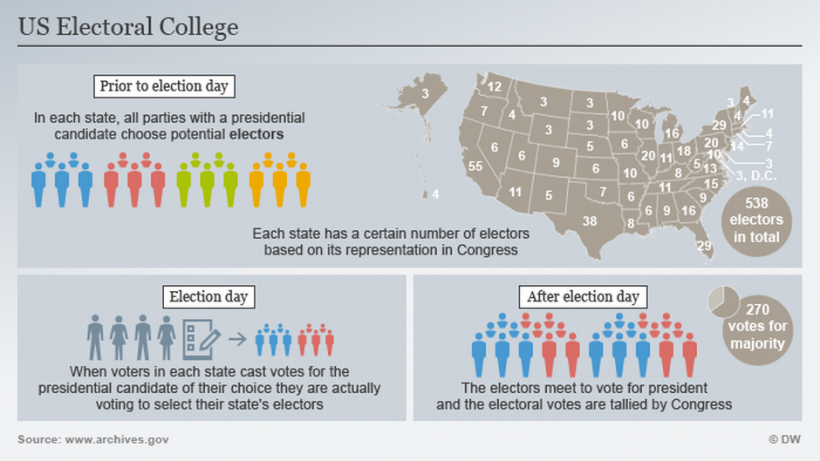 So how does it work?

Each of the 50 states is automatically given 2 Electoral College votes and an additional chunk of 435 of the remaining electors based on their population, with each state getting at least one, and the final 3 going to the district of Columbia. Using this system tiny Wyoming gets 3 electoral college votes while massive California has 55. While this may seem unfair to Wyoming it actually means each person’s vote there counts for over three times as much as someone’s vote in California!

When the founding fathers wrote the Constitution, they weren’t sure how to elect the President, with some arguing for a wealthy elite to decide and others wanting it to be directly in the hands of the people. The Electoral College was therefore seen as a compromise of the two systems. Also, by guaranteeing each state at least 3 votes the founding fathers thought that it would prevent the smaller states from being overlooked.

Well, sort of…… In 56 Presidential elections, the least popular candidate has been made President only 4 times, it just happens to be that 2 of them have been in the 21st century (including 2016). However, with almost all the states giving all of their Electoral College votes to the winner in that state it has meant that rather than the smaller places getting forgotten about, it is the ‘safe’ ones. As such, each election tends to be focused on a handful of ‘battleground’ swing states with the others getting overlooked.

Because of this, over 60% of Americans want to change to a direct popular vote and abandon it altogether, but the American system is very hard to change, so don’t expect the Electoral College to go anywhere soon.

The heads of departments are relatively simple to explain and so we won’t go into too much detail here. They are mostly appointed by a President (and approved by the senate but more on that later) and are in charge of implementing laws passed in congress and running their departments on a day to day basis.

Much easier to explain (thankfully!), the legislative branch of the US government is essentially the US Congress and is the group with the power to make laws. Made up of the House of Representatives and the Senate any law must pass through both of these to come into effect. They also have the extremely important ‘power of the purse’, meaning they are allocating the budget, providing a huge block to the power of the President.

Made up of 435 ‘House Members’ these are voted in every two years in national elections. Each state is assigned a number of members that represent them based on how big their population is but making sure that every state gets at least one! Because they only serve two-year terms, and members-only have to be a minimum of 25 years of age, the House of Representatives is often seen as the lesser of the two chambers. However, they also have the extremely valuable power of raising revenue through taxes. This means that any sort of tax reform needs the House onside and so they should not be overlooked.

They are also entrusted with the power to begin the impeachment process on a sitting President, which means to forcibly remove the President from office, although it is the Senate that eventually decides on the President’s guilt.

With its much more exclusive membership of only 100 Senators, the requirement to be at least 30 to stand, and its much longer 6-year terms, the Senate is generally seen as the more prestigious of the two chambers. Although Senate elections are every two years, only a third of Senators are up for election each time, to form staggered terms. With each state having two Senators, this chamber was seen as a way to ensure the state’s rights, and prevent the larger states from dominating the less populated ones.

As mentioned, the senate has the ultimate say on whether a President is impeached, as well as being responsible for ratifying (confirming) the President’s treaties with other nations and approving their cabinet and supreme court appointments. This provides clear limits to the President’s power.

The Judicial branch of government is the 9 members of the Supreme Court, 13 U.S. Courts of Appeals, and 94 federal judicial district courts. Although they are not in charge of writing or passing laws, going to war, or spending money and so are easily overlooked, the Judiciary is hugely important in limiting the powers of the two more prominent branches of government. Ultimately it is the Judiciary's role to interpret the Constitution of the United States and ensure that any laws passed, or actions are taken, by the others do not break our most ironclad rules. 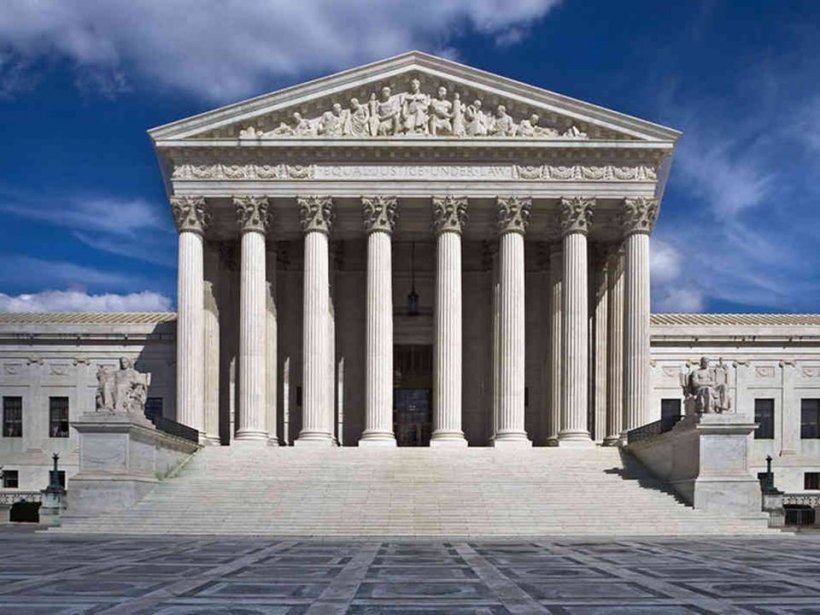 There We Have It

Okay, there was a lot to take in there I know, so feel free to come back to check this out as many times as you need (I have already forgotten half of it!), but there are the basics of our crazy, beautiful political system, in all its complicated glory.