What You Need to Know About the Disadvantages of SMS Marketing

There’s no denying that there are tons of advantages to SMS marketing. One Google search will show you that. But what about the disadvantages?

With all the new messaging apps and alternative forms of advertising out there, SMS marketing may not be the most lucrative way to go.

Like any marketing strategy out there, it isn’t 100% fool-proof. Here’s what you need to know about the disadvantages of SMS marketing, and what platforms you should try instead.

What Are the Disadvantages?

SMS marketing may have stuck throughout the years, but it’s hard to ignore the areas where SMS is lacking in comparison to its alternatives.

Your messages are limited to only 160 characters. Anything longer, and you risk your message breaking up into several smaller messages. This means one offer to a consumer could bombard them with three or four notifications. Nobody wants that.

Along with the short character limit, you also can’t really send any rich media. You don’t have the space to send any audio or image files, which means you only have 160 characters to work with, and it’s hard to get very creative in so little space. Plus, you run the risk of links breaking or images not downloading.

A lot of SMS marketing campaigns also end up being too vague. There isn’t enough space to give an enticing offer and a call-to-action, so most of the messages end up falling flat. 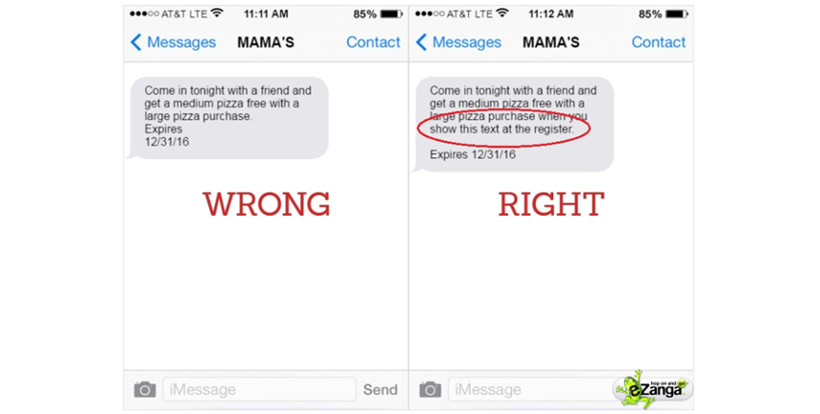 Consumers Have to Opt-In

You can’t be outbound with SMS marketing. Every lead you get has to be inbound; unless consumers subscribe and give permission, you can’t text them. In order for you to legally be able to market to someone, they have to opt-in for your SMS list.

It Can Be Spammy

Granted, when consumers opt-in, you’re technically not spamming them, but sending too many promotional text messages can still feel like spam. So (adding onto the already small character limit), you can’t exactly send that many promotional messages in a day, or even a week. It’s too easy for SMS marketing to come across as spam.

Like a spam box in email, most cell phone users have the option to block incoming texts or calls from unknown numbers. This automatically filters any texts that don’t come from a saved contact to be filtered into a spam box where the consumer may never even realize it’s there.

You Can't Tell If Texts Have Been Read

There’s really no way to consistently tell if your SMS messages are being read, unless you’re texting someone with the same phone and they have their read receipts on.

Granted, a majority of people read their texts within three minutes of receiving it (90% of people, in fact), but there’s still no way to know for sure.

If you don’t follow the opt-in/opt-out regulations of SMS marketing, you could get hit with a fairly hefty fine.

Take Papa John’s for example. They sent strings of spammy messages to their customers (sometimes in the middle of the night) without their permission. The punishment? A $250 million fine in the form of a class-action lawsuit. Ouch.

Marketing is all about starting a conversation. You want to reach out to potential consumers and form a relationship with them. With the limitations on how much and what you can send through SMS marketing, you have to be short and to the point with enticing offers. There isn’t much room to form a relationship of any sort.

What Should You Use Instead?

In this day and age, technology is an inherent part of communicating. Standard text messaging has been around since the days of the flip phone, so it might be time to try one of the newer messaging platforms.

Messaging platforms, such as WhatsApp and Facebook Messenger, have more features and options than SMS, which can help you to personalize your marketing efforts even further. Some of these advantages include:

In comparison to the features in SMS, clearly, messaging apps are a more lucrative investment for marketers. There are so many more options for personalization and creativity that you just don’t get with SMS marketing.